One of the best State Parks that I visited in Wisconsin was Copper Falls State Park – where it bears its name from the area indigenous tribes- where they would use the copper in the area to create tools and other weapons – later the area was used by minors in search of the copper, but when it was deemed a failed operation and abandoned by the investors the land was later donated to the state as public land and turned into the state park that stands today.

Even though Copper Falls gives its name to the state park – there are TWO different waterfalls that make up the park – 1. Copper Falls 2. Brownstone Falls – both offer unique and beautiful views within the park – plus plenty of trails leading up and around the falls for pictures and other hiking moments. The Trail leading you back to the falls is known as the “Dough Boy Trail” and I would categorize the hike as easy. Just prepare for a few sharp climbing situations via stairs. Check out the video below to get a better idea of what Copper Falls State Park offers.

The Bad River and Tyler Forks

Another unique feature of the State Park is the areas where different rivers come together creating waterfalls and fast-moving and rushing water. Bad River itself earns its name from French explorers who named it “Mashkiziibi” and mistranslated it to “Bad River” a name fitting to its wild behavior with flooding, especially against the past area minors and loggers.

The second park (which does NOT represent an order of rank) shines a light on two different waterfalls – The Big Manitou Falls and The Little Manitou Falls – both are beautiful in their rights, but Big Manitou has its special recognition. It boasts the highest waterfall in Wisconsin and the 4th highest waterfall East of the Rockies. Worthy of its 165 ft. drop – you can hike a short trail to see several observation points for the waterfall. Below is a video recording the experience at Pattison State Park – mark it on your bucket list!

If you choose to explore Pattison – you probably have come to see the tallest waterfall in Wisconsin with Big Manitou, but don’t let the name “Little Manitou Falls” fool you. It probably was our favorite waterfall of the two – because Little Manitou offers two different waterfalls side by side dropping 31 feet, and while not tall, the waterfalls offer spectacular beauty and an opportunity to get up close to the waterfalls.

Don’t miss the opportunity to hike up top and explore around the area – the sound of the rushing water is fantastic and surely will give you plenty of great photo opportunities. While we were there some of the local tourists were in and around the cold water to get closer to the falls for a one-of-a-kind experience. Overall, I would rate Patterson a 10 out of 10! It’s surely worthy of a waterfalls adventure stop!

Don’t forget to hike past Big Manitou Falls and take the trail down to the Black River – Be prepared to make some stops on the way up and back (Steep!) It will get your heart racing for sure – but when you come to a set up wooden stairs at the base and near the river, you will be treated with the rocky bed and beauty of the slow-moving rapids of the Black River – well worth the hike down. Overall all there are over 7 miles of trails in Pattison between The Big Manitou Falls Trail, Little Manitou Falls Trail, and Beaver Trail.

Not far down the road from Pattison State Park (18 miles) sits scenic Amnicon Falls State Park (both parks are a short 30-minute drive from the Duluth, Minnesota, and Superior, Wisconsin regions. They give plenty of excuses for a short getaway from the city – and offer waterfalls on top of it all! This entire region sits along what is known as the Douglas Fault – which shifted about 500 million years ago and provides the waterfall effect with the rivers and areas surrounding the Lake Superior area. Pattison State Park and Amnicon Falls State Park are connected between the fault line. Though smaller – do NOT miss Amnicon Falls, as it provides two different falls (Upper and Lower) with plenty of up-close photo opportunities.

The one thing that separates Amnicon Falls from other State Parks (besides the beautiful waterfalls) is the 55 foot covered bridge – known as the Horton Covered Bridge. The bridge itself is historical as it shared a special architecture calls “Bow String Bridge” which provides stability – these sets of bridges built in other areas as well are known as “Horton Bridges.”

The bridge spans across the river and almost directly above the Lower Falls – to get a better idea of the area and Amnicon Falls State Park, plus the upper and lower falls, including the Horton Covered Bridge – check out the video below.

There are many different waterfalls and state parks to see in the great state of Wisconsin – but I felt these were 3 state parks, with waterfalls that represented the overall beauty and unique characteristics of Wisconsin State Parks – it only takes a few short hikes to start to fully appreciate what their state parks have to offer. I shared in one of the videos above that I felt – though smaller – they rivaled some of the national parks in their overall offerings and beauty. Mixing their charm with some of the National Forest areas nearby would put Wisconsin on the map as one of the most beautiful states in the U.S. – if you haven’t been, put it on your bucket list and check out some state parks – and don’t forget Copper Falls, Pattison, and Amnicon Falls State Parks! 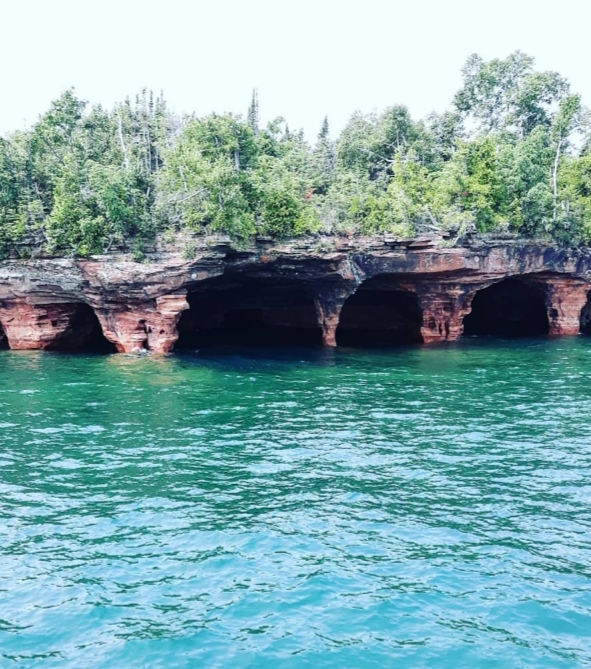